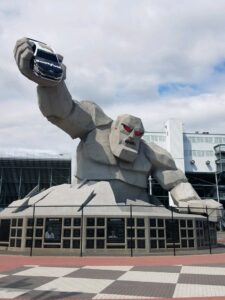 It’s Sunday! Nascar announced a return to racing on May 17th at Darlington Raceway with a Cup Series race that will serve as the first of seven races over an 11-day span at two different race tracks.  The second race will be three days later on May 20th and will also be at Darlington, but it will be a night race. Four days later on May 24th they will hold the Coca-Cola 600 in Charlotte, which will also be a night race. And finally, another night race in Charlotte on May 27th. That’ll be a lot of racing crammed into a short amount of time, but they have a lot of races to make up.  I should also mention that these races will all take place without spectators.

Nascar iRacing will be at the virtual Monster Mile at Darlington for the Finish Line 150 today at noon on Fox Sports 1. Bring it on!