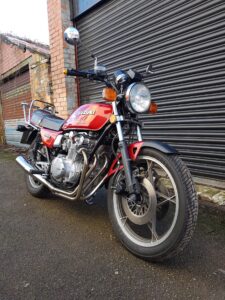 It’s Wednesday. Now that summer is here, I asked my readers to send in photos of their summer toys to have them featured here on my site. The first to arrive is Rob’s 1981 Suzuki GS550. Looking at it closely it’s hard to believe that it’s 40 years old and still in such good condition. Very cool, Rob. Keep it on the road and enjoy it.

Keep, You featured my Harley Sportster already, But now I have my 1981 Suzuki GS550 out of mothballs and ripping up the road in the sun. Hard to believe the UJM’s (Universal Japanese Motorcycles) are 40 odd years old now. I wanted one as a teenager, the bookkeeper’s boyfriend had one and I lusted after it and also to be honest the bookkeeper. This is the last of the two valve GS’s and has anti-dive forks. Sounds great, it is fast enough and very comfortable for my 6’1″ – who says Japanese bikes don’t last. -Rob