It’s Tuesday. Why God? WHY! I… I… I’m just to traumatized to comment on this.

Hey Keep, Just saw this on a local fire/EMS FB page. Happened in Delmar, Delaware earlier this morning. Sounded like everyone was fine, just the vehicle damage…. But still brings a tear to the eye…. Love the page! Second thing I hit every day (right after coffee)! – S

The Heat Is On 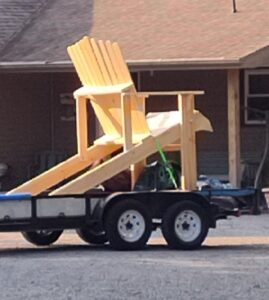 It’s Monday. We had another hot & humid weekend. I loved it because I’m not looking forward to next month when temperatures begin to wind down.

My Dad has been into woodworking for over twenty years now. It started out as a hobby but it wasn’t long before he started selling his creations. These days he takes on custom orders like the ginormous Adirondack chair (pictured right) for a nearby resort. It still has to be stained but he said it drew an awful lot of attention while trailering it to the resort! 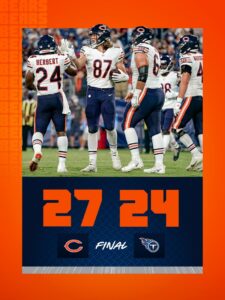 It’s Sunday! Well, whaddaya know! The Chicago Bears pulled off their second preseason win last night against the Tennessee Titans. In what seemed to be a well matched game, they managed to hand the Titans their first loss with a final score of 27-24.

That’s it for the Bears preseason games. The regular season will begin in two weeks on September 12th when they take on the Los Angeles Rams at Sofi Stadium. It still feels early for Football to me. Maybe it’s the extreme heat blanketing much of the country, but it can’t last forever—only three days until September. Crap.