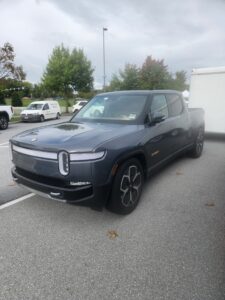 It’s Thursday. One of my readers caught this Rivian R1T pickup at a car show in Hershey, PA. Rivian says their R1T is the first fully electric production pickup truck. They’re made down in Normal, Illinois, and I’ve probably seen three or so out in the wild. They’re easy to spot because of the vertical headlights, but that’s also the feature that I dislike the most of their design. The headlights just look oddly out of place, almost like they were thrown in at the last second. Anyway, that’s just my opinion. If you’re interested in getting one, ya better start saving your pennies because at roughly $73k they’re a tad pricey.

Keep, Old and new at Hershey car show. This was in the parking lot. -Bernard