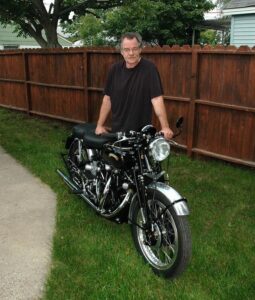 It’s Thursday. It’s heating up out there so I asked all of you to send in photos of your summer toys. Cars, bikes, boats or whatever you like to play with over the summer. So far we’ve seen some really nice bikes and a few cars. Today I have another bike, but it’s not your average motorcycle. It’s a 1950 Vincent Shadow that underwent a near 10 year restoration by its owner, Marty. He says that it’s a real head turner and judging from the photo, I’d say he’s right. Thanks for sending it in, Marty.