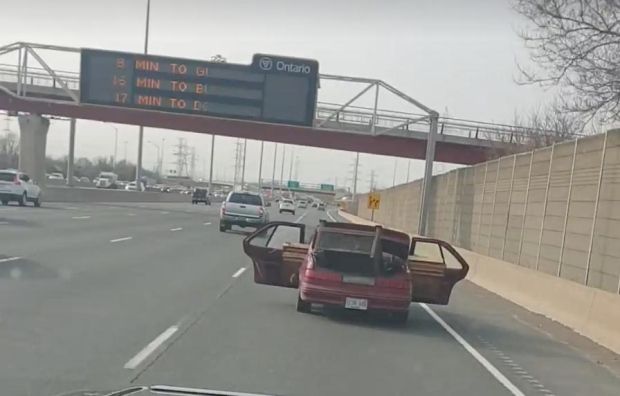 It’s Thursday. What, don’t they have pickups in Ontario?

A baffling display of driving was caught on video late last week, with a driver carting a load of wood on the QEW with the rear doors of their car wide open.

In a video posted on Facebook by David Fafinski, the driver can be seen on the highway near the Red Hill Valley Parkway, heading toward the Burlington Skyway bridge.

In addition to the open back doors poking into adjoining lanes, the car’s trunk is also propped open, with what looks like a piece of furniture sticking out.

“That’s an unsafe vehicle there. Doors open — who knows what could come flying out of there,” he said. “That’s not anything you ever expect to see on the highway.

Schmidt said it’s not the first time he’s seen something like this on a highway in the area. He once stopped the driver of a two-door sport coupe who was carting a couch with a door hanging open, held down only by a seatbelt, he said.

It’s unclear if the driver in this incident will face any ramifications. Schmidt said it’s difficult to make out the vehicle’s licence plate in the video, and he didn’t know if the incident was previously reported to police.